Home » On Location with Tommy Shih and Profoto (Part 2)

On Location with Tommy Shih and Profoto (Part 2)

To read part one of this two-part review click here: https://www.hawaiicamera.com/blog/on-location-with-tommy-shih-profoto/ 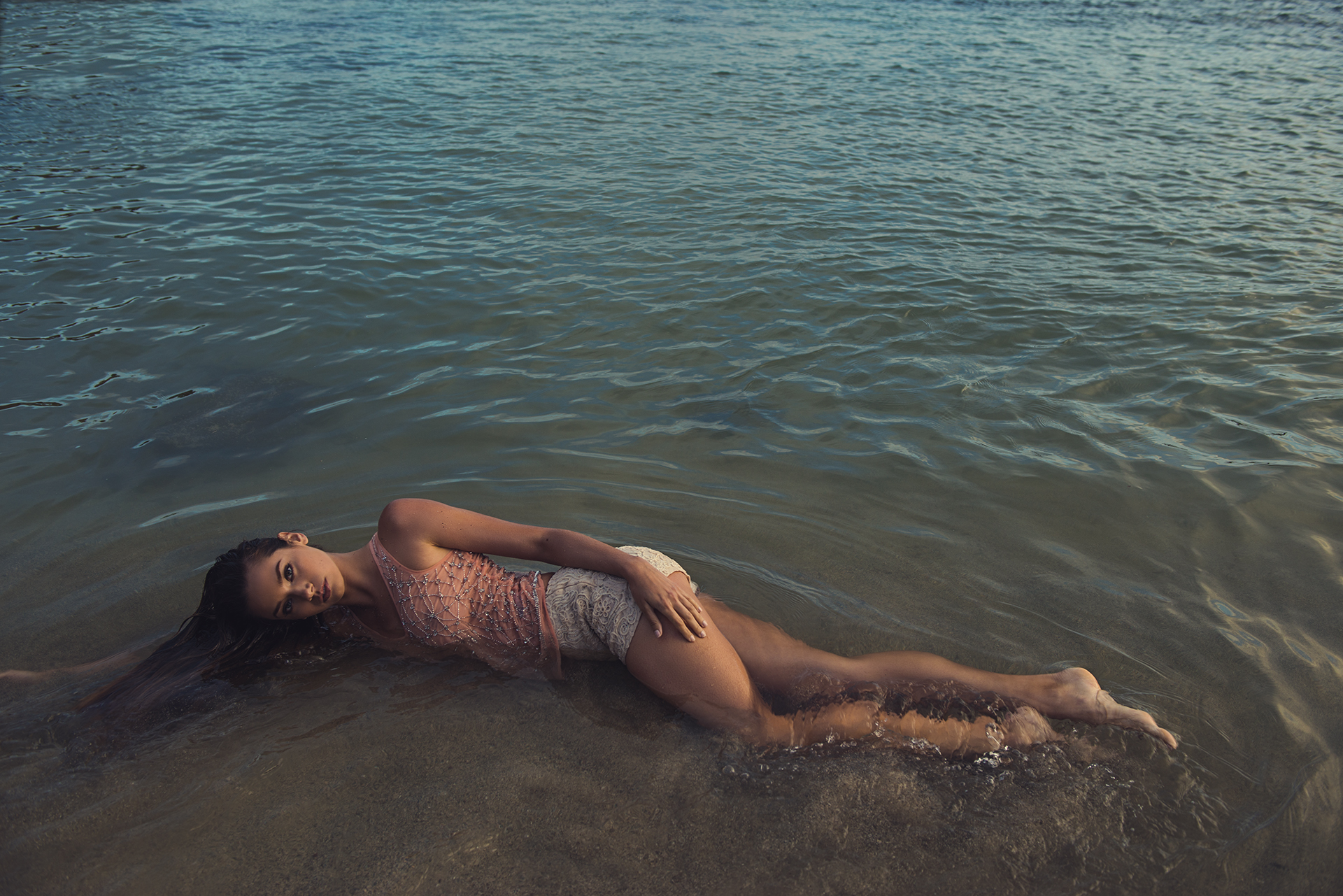 Right around this time we started to get some really beautiful golden hour light. I probably could have gone with the natural light and achieved something close to my vision for the image, but one of my focuses during this shoot was accentuate Michelle’s beautiful bone structure, especially her high and defined cheekbones. You can see this in the other images. So even though this was a wide shot, a small pop of light from a Profoto B2 with Magnum reflector positioned above Michelle gave a specular highlight to define her cheek and another visible one on her left leg as a bonus. 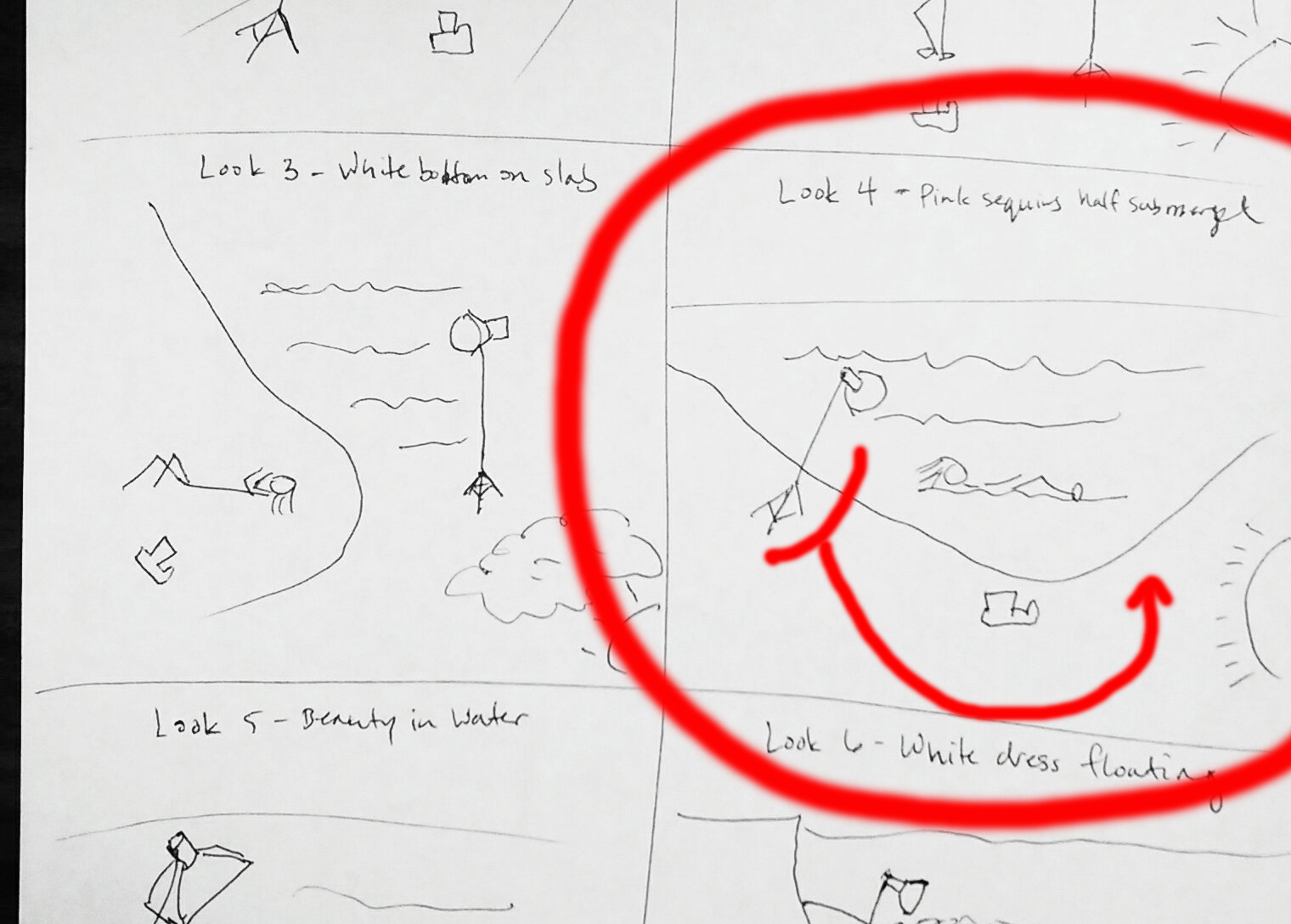 In the image at the top of this section, the light is to the camera right rather than camera left as shown in this otherwise realistic artist rendering of the set up.

My thoughts: I went with the B2 again due to the lighter weight of the head. I wanted the light to come from overhead, and without a boom arm Chris would need to raise and tilt the stand at times to get the right angle for the specular highlights I was looking for. 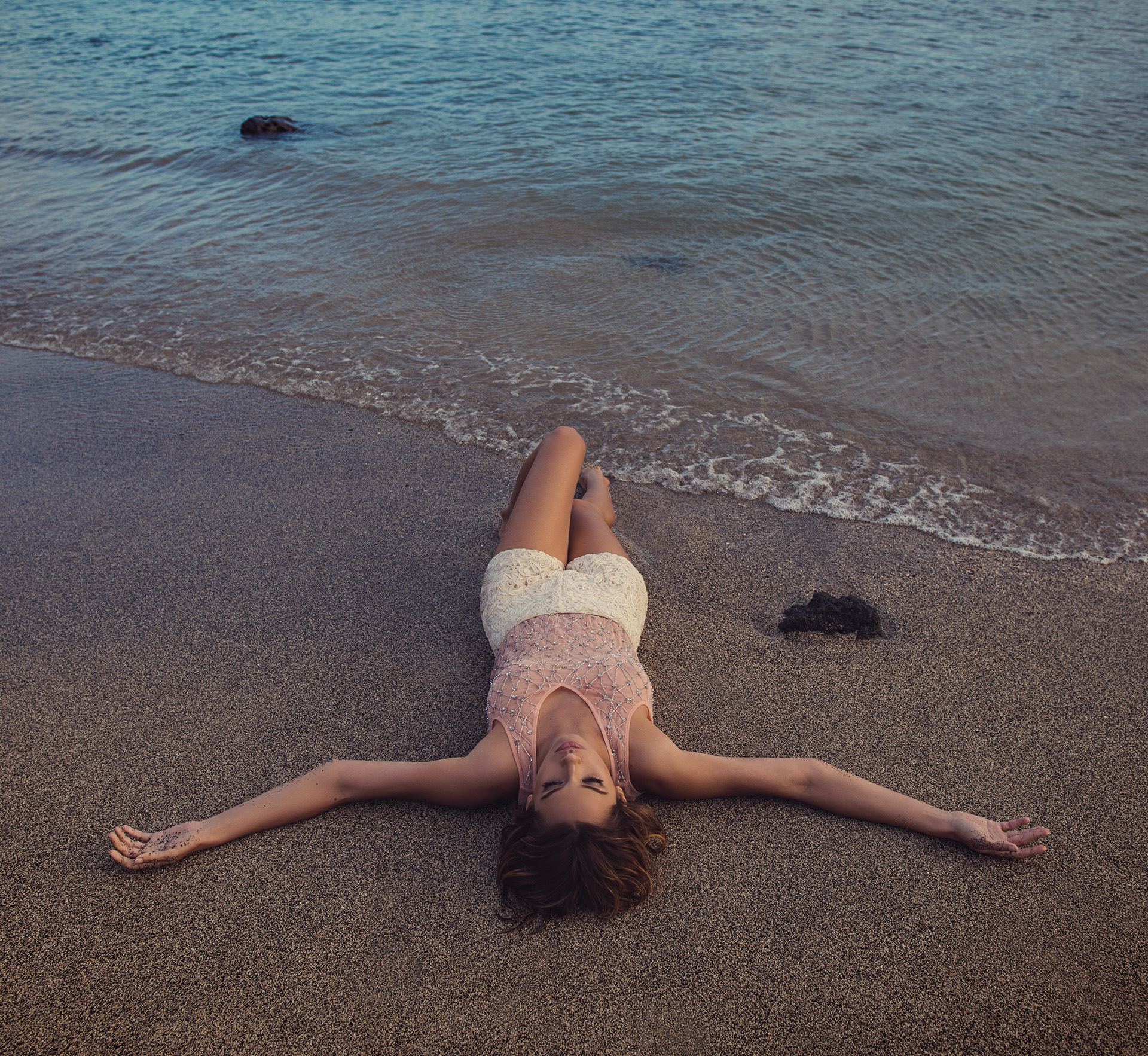 As a bonus, here’s a second image using the same setup, but I swapped out the Magnum reflector for the Profoto OCF 2’x3’ Softbox. For this version the softbox is just above and out of frame camera right, and provides a softer light. It acts as the key light in this scenario. The golden hour light mostly provides fill, the low angle of the light coming in to brighten what would be really dark shadows in Michelle’s face). Two different approaches to a scenario that both provided satisfying results. 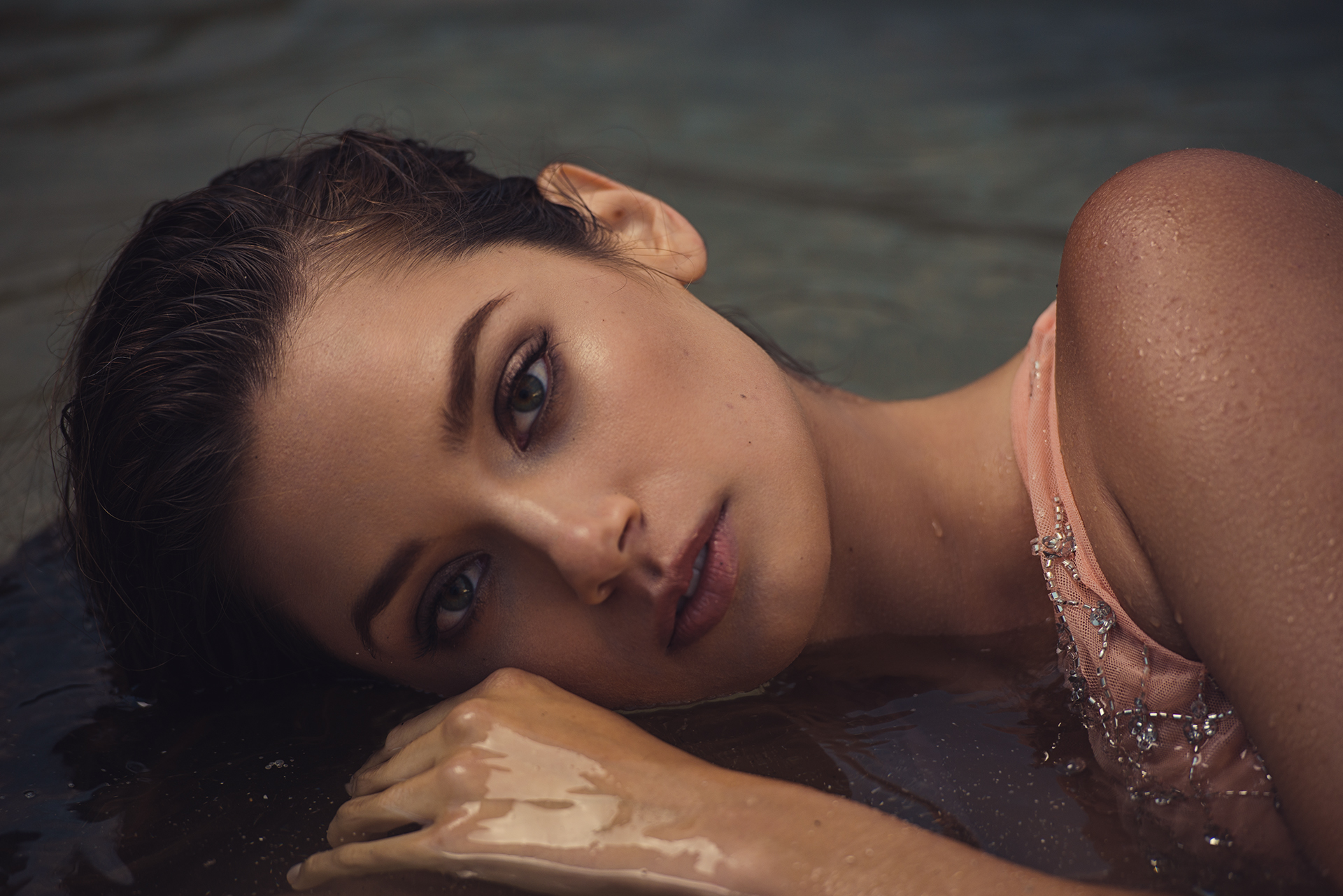 While Michelle’s inspiration came from that first image she sent me, I’ve been wanting to do a beauty shot half submerged in the water for some time now. I decided to tack it on to the last look since we were already in the water. I was planning on using a softbox for less of a harsh look, so the Profoto OCF 2’x3’ Softbox was the choice. Knowing I wanted to do this immediately after prompted me to try it out with the alternate wide shot in the previous look. 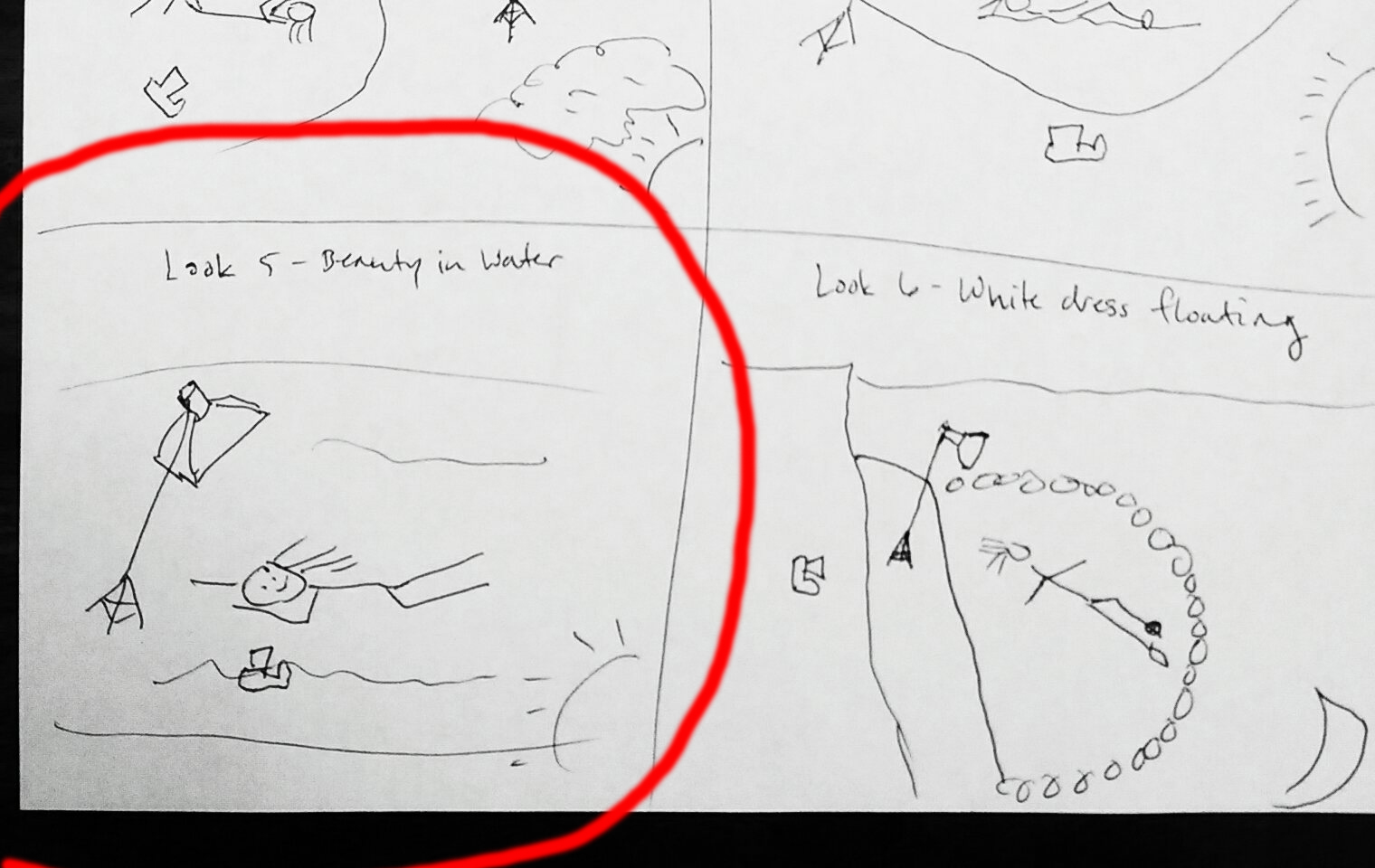 Pen and ink drawing of lighting set up. I think we’ve all seen the hyperrealistic speed drawing Youtube videos.

The sun was setting over the mountains at this point, so we were getting little if any light from the sun. If you look closely you can see just a hint of the sunset in the yellow/orange catch lights in Michelle’s eyes. I had Chris bring the B2 with softbox in fairly tight, about 3-4 feet above Michelle and we used it’s soft wrapping light to light everything in frame. You can make out the softbox in the reflection on the back of her hand. I shot this f/4.0 at 200mm so that I could get her eyes and mouth all in focus even if I was a little off plane, but I could still have the water in the background blur out.

My thoughts: Kecia’s makeup is always beautiful, but I wanted to note how well it holds up to the scrutiny of a tight beauty shot. I asked for very natural looking makeup, and any time you add artificial light you run the risk of “seeing the make up” rather than having the make up accentuate the model’s face. Kecia did a great job here of avoiding that while still creating a dramatic look. Oh and this is with me asking Michelle to submerge her face to varying depths the whole time. 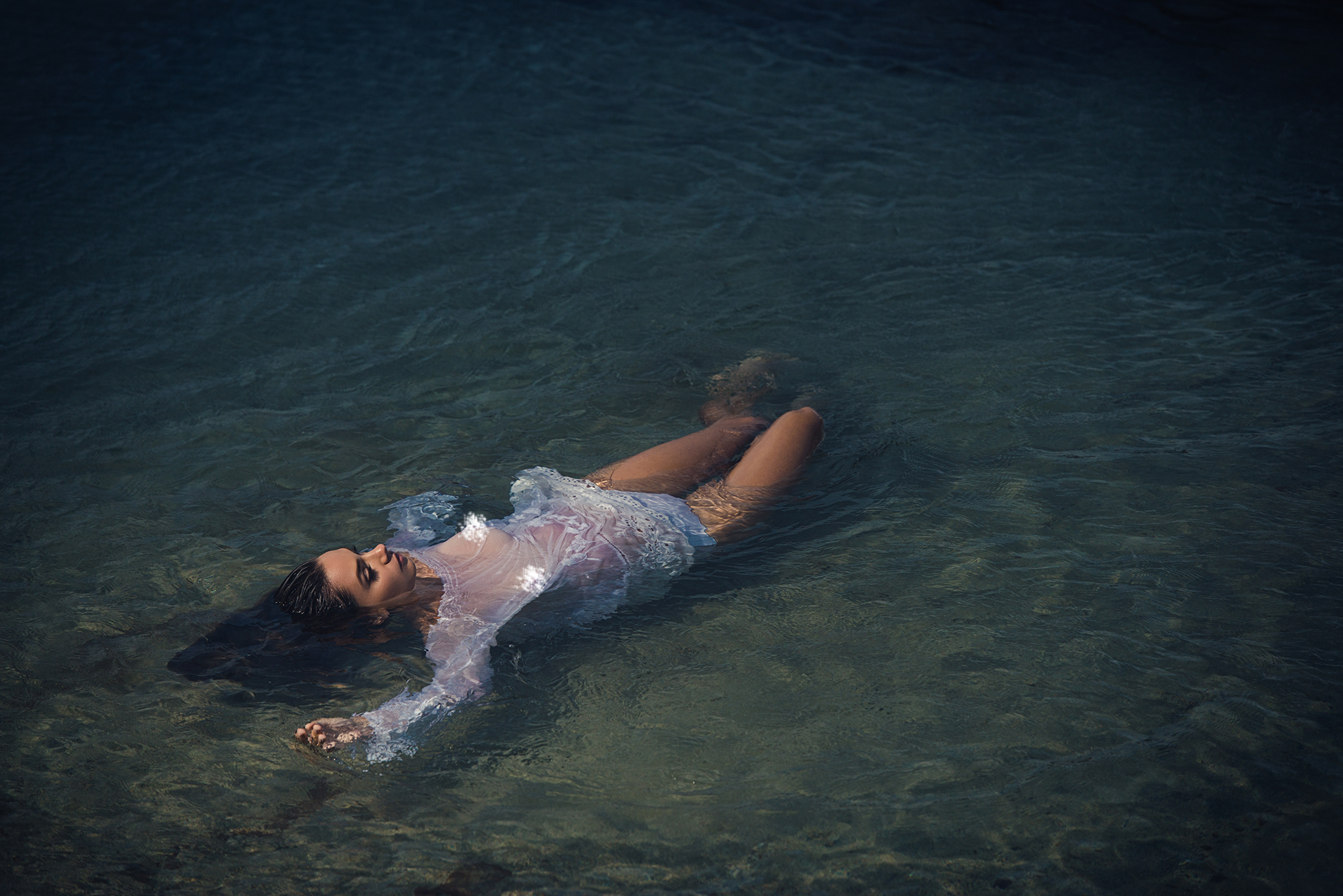 Our last look of the day was the one Michelle had been waiting for. She wanted to drift in a white dress in a pool of water, and AD’s was the perfect choice for it with the recent addition of pool on the left side of the cove. This was going to be the most dramatic shot, and I thought making it a night shot would get us there. It wasn’t actually night, more like dusk, but if you’ve shot just after sunset you know how quickly the the light drops below the levels that your sensor can pick up, even with fast glass. 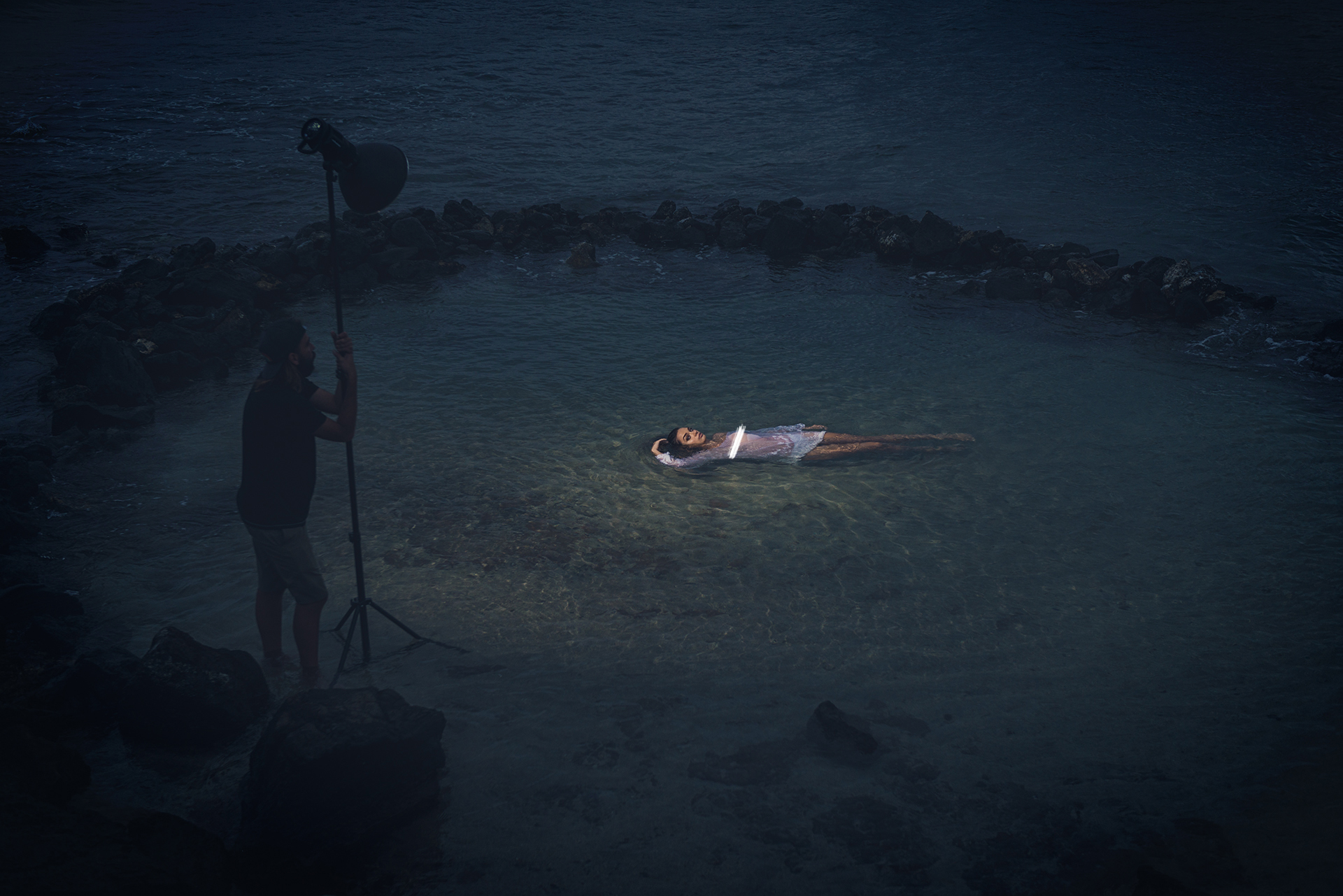 This shows you Chris and Michelle’s positions from my vantage point.

I almost always have the key light off-center–often further than most photographers would–to create a three-dimensional look. The technique is called chiaroscuro, which is the use of strong contrasts between dark and light. You can see it in the image from Look 3 in Part 1, but I really like how the light rakes across Michelle’s form and makes the scene have a very realistic and tangible feel. With her head positioned the way it is, there is also additional shadow contouring her cheekbones, which was a focus as mentioned earlier. I went with the Profoto Magnum Reflector on the B1, because I wanted the maximum light output that combination would give me since we’d be throwing the light a pretty far distance. The parabolic shape really concentrates the light creating a medium width beam with very noticeable drop off as you can see in the BTS photo. It was just the right size to create a pool of light around Michelle.  Once we had that figured out, I just let Michelle drift and create shapes with her body, with Chris tracking her with the light. Then I shut up and clicked the shutter, giving only minor input mostly on positioning in relation to the rocks. Of course she couldn’t really hear me anyway because her ears were under water. At least that’s what she said, because I’m sure she wasn’t ignoring me on purpose.

My thoughts: If you’ve been paying attention to the metadata I’ve included with the images, you’ll notice that I’m not changing the camera settings much. It worked out that way because I wanted to show a progression throughout the day, starting with a morning light feel, and ending with a night shot. We were able to get all of this done in a little over two hours of shooting by getting the ambient light looking right, and then adjusting the lights on Michelle balanced to the appropriate levels. With the light falling off so quickly towards the end of daylight, shooting really fast and keeping the settings pretty close worked out.

The B1 kit is great. After eight months of ownership I haven’t regretted the purchase at all, and from my perspective, it has actually improved my work. How did it do that? The portability of the B1 kit and the lack of cables and battery packs has allowed me to consider using lights on shoots or specific situations and locations where I’d never have considered using them otherwise. Anyone who’s shot at AD’s knows it’s a bit of a hike, especially with lighting and grip. With the B1 Location kit you just throw on the backpack, grab a couple stands and you are set with 1000W/s of studio quality light. The only issue I’ve had with them is that at 6 pounds they are a little top heavy, so my large-sized aluminum stands aren’t really as secure as I’d like, even when sandbagged. And sandbags are heavy when taken on location.

The B2 kit is a different beast altogether. It is extremely light. At 1.5 pounds each, the heads weigh almost nothing. At 3.5 pounds the battery pack weighs almost nothing too, which is amazing because these guys at 250W/s each are 10 times more powerful than speedlights. At least this is what I’m told, since there’s no perfect way to compare W/s ratings for strobes and guide numbers for speedlights. The biggest problem I ran into with the B2 kit was the cables. They are short, about 6 feet long, and if you are using two heads you almost certainly will need to buy an expensive extension cable or two if you want to light anything other than a head shot.

The OCF system of modifiers is perfect in theory. All the components are light and very compact when packed. Shockingly so in the case of the softboxes. I was able to slip both softboxes into an empty side pocket on the Backpack M. The only component I had an issue with was the OCF Speedring. The good: it’s designed so that you can just snap the supporting rods of the softbox right into place so you don’t have to struggle bending the rods into their respective slots. It has all the features of the Profoto’s great original speedring, with the rubber collar and clasp mount as well as the convenient color coding system so you can easily identify the correct slots for the rods on the softbox you’re building. The bad: In practice the OCF Speedring is a little delicate, which is not something I’ve ever said about Profoto gear. It is made of a plastic-like material rather than the metal construction of the Profoto RFI speedring. I tried to bend it and there wasn’t really any flex, so I thought that was a good sign for its durability. Unfortunately, during the first look with the 2’x3’ mounted, the entire softbox came off the head in a gust of wind. The mounting collar had come loose and one of the tabs that allowed you to snap in the softbox rod had snapped clean off. We had a second OCF Speedring set up with the 2’ Octa, so we swapped that one in and continued shooting while Chris reattached the rubber collar on the broken one. 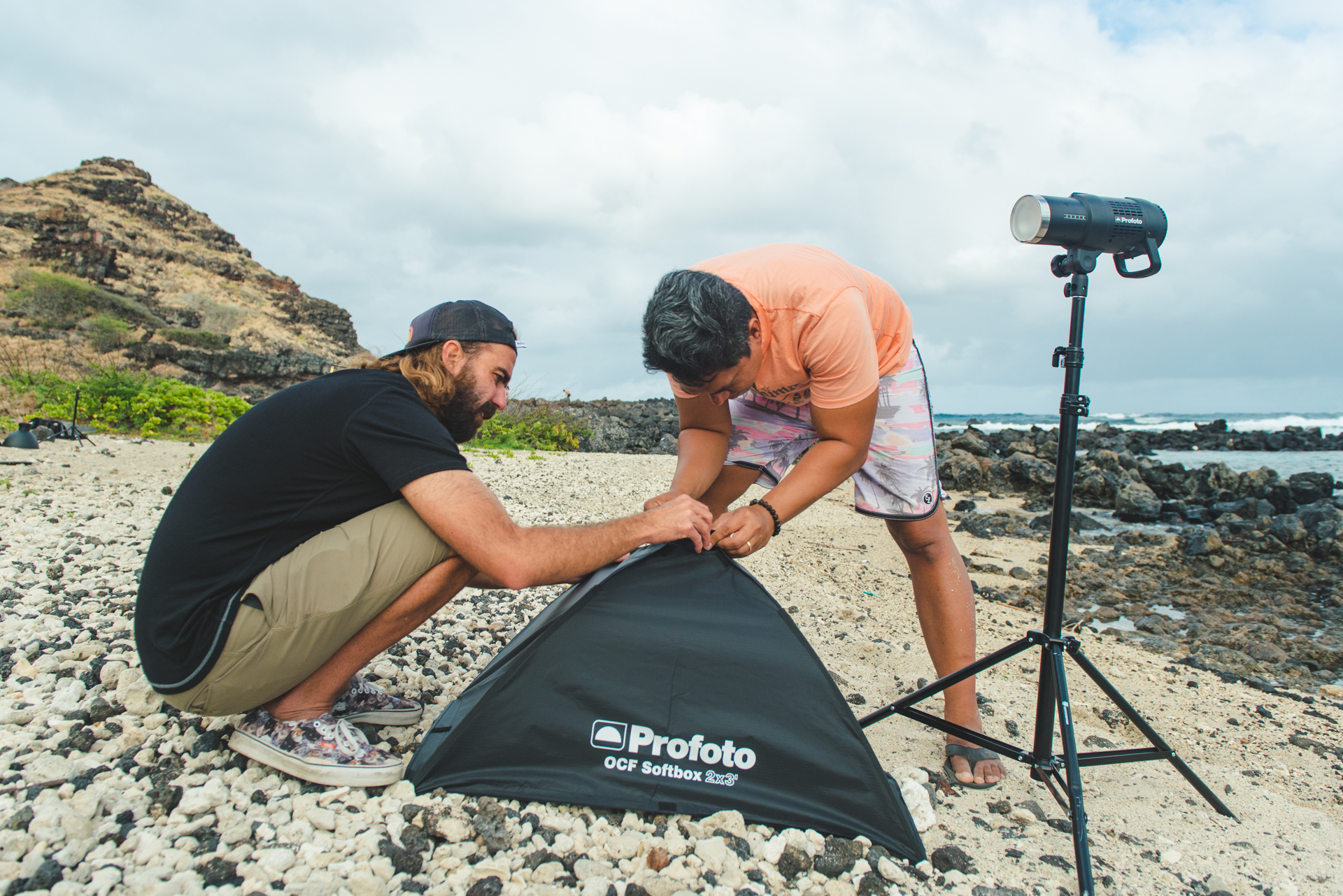 Final final thoughts: For my purposes the B1 Location kit is nearly perfect. The weight and weight distribution of light stands with the heads is a bit of an issue, but otherwise I couldn’t ask for more from a portable kit that I can take on location, even without an assistant. Well, maybe a new backpack that can roll as well would help. The B2 Location kit doesn’t really work for what I do, because you go back to the limitations of heads with cords, especially if you want to use two heads. I think the best application for the B2 might be for wedding shooters that want to take their portrait lighting setups to the next level or event shooters that want more power and an off camera flash. It comes with a case for the battery pack that allows you to wear it on a shoulder or attach it to a belt. Set up like this it’s a speedlight with a battery pack on steroids with a full suite of modifiers that attach right to the head. And that’s what the new sets of off camera flashes, the B1 and the B2 can do for you, take your lighting to the next level. Does anybody else have experiences with either of the OCF kits they can share? How and when do you use the lights and for what type of photography do you use them for? Have you found any limitations or had any frustrations?

My next Profoto blog post will be a little different, covering my process using four B1 heads while doing an editorial shoot for my good friends and HiLuxury Magazine.