To read part one of this two-part tutorial click here: https://www.hawaiicamera.com/blog/tommy-shih-waikiki-magazine-p1/ 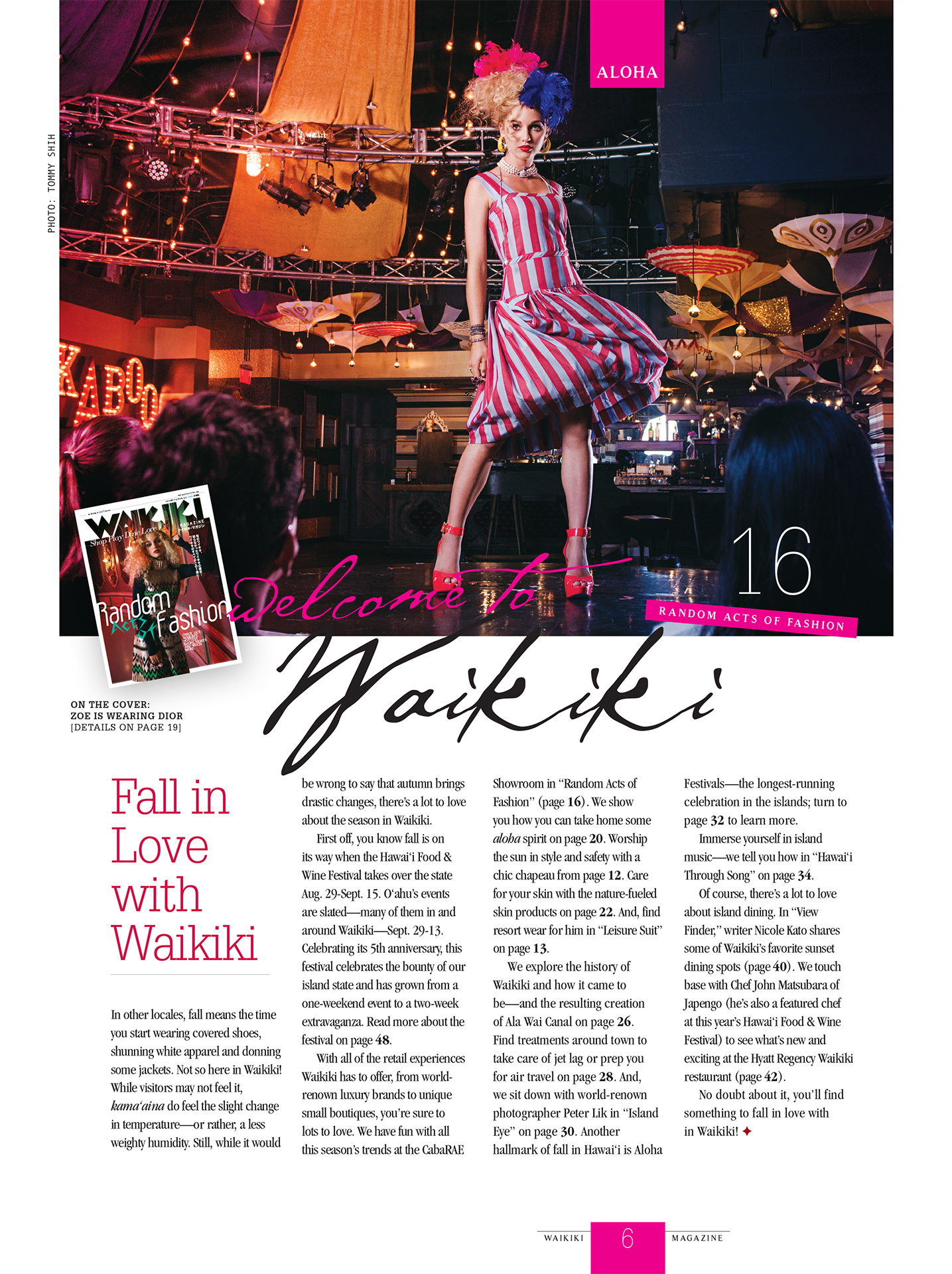 If you’ll notice, we never did make up the 30 minutes we lost at the beginning of the shoot. In fact we were even further behind, with shooting for look 3 scheduled to start at 2:40PM and it was now 3:30. When doing the location scout, this location immediately stood out to me as having the most potential for a really dramatic shot. We were actually going to use the center stage and try to create the sense of a live show to the best of our ability. I wanted the viewer to feel as if they were in the audience watching a performance while still feeling the grandeur of being in the location. And we needed to make up a lot of time to try be out of the theater by 4:30. Why 4:30? CabaRAE had a show to put on that evening! Eep. 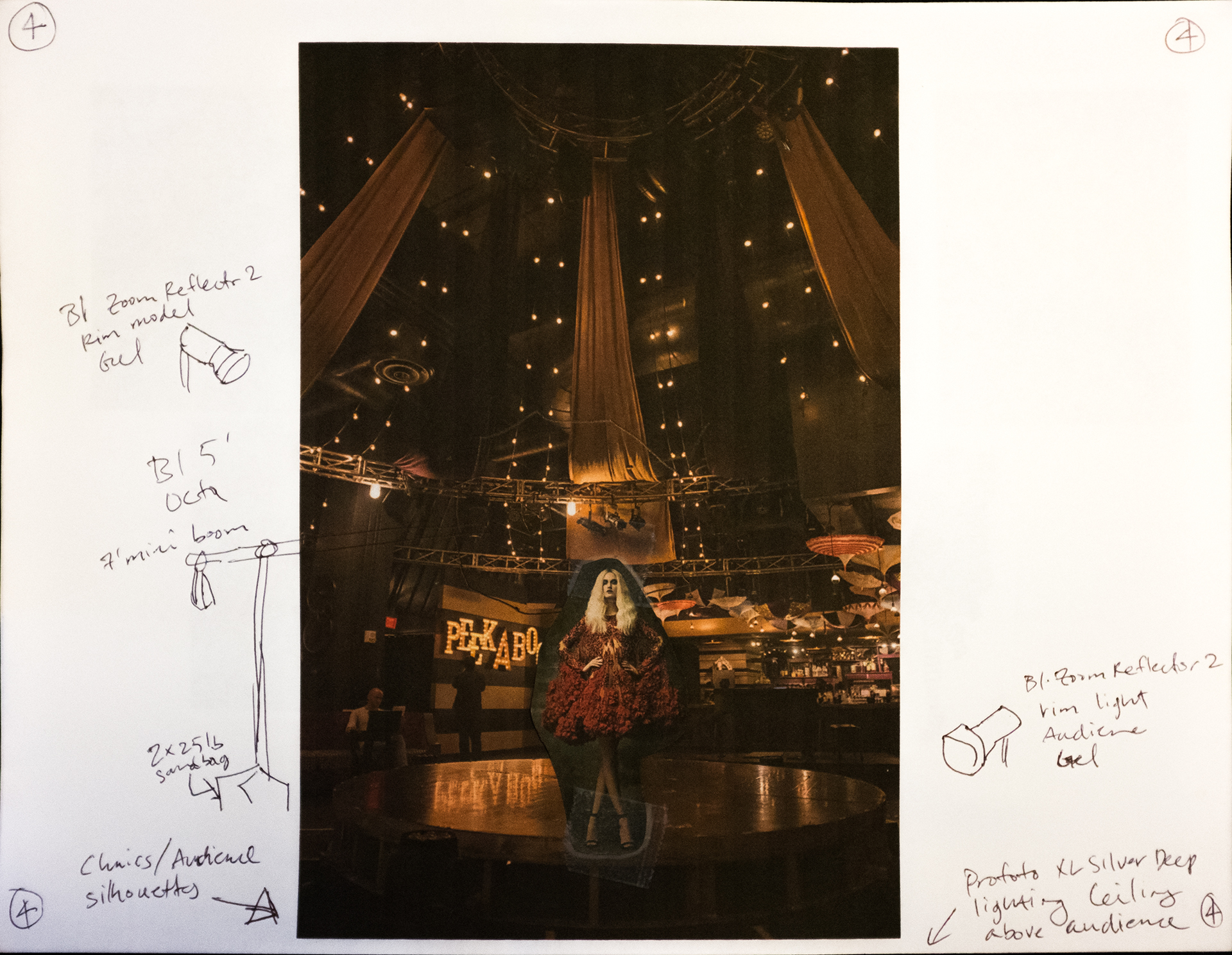 A lot of voyeuristic imagery is done with long lenses and shallow depth of field to give a sense of focus on the subject. A narrow field of view and blurred out areas in frame makes you feel like what you are seeing is not for everyone’s eyes. I wanted to incorporate some of that, but needed the option to pull back and do a wide shot to show, in this case, the theater itself. I came up with the idea of pulling some of our crew and placing them in chairs surrounding the stage and just barely lighting them so as to not distract from Zoe, who would be the feature act. Kecia, Jake, and Seychelle all pulled double duty, acting as the audience for this shot. As you can see, sort of, the theater has some great details when you look up, with all the silks running from the ceiling, strings of lights, the umbrellas and the bar, a “Peekaboo” sign, and even the ducts, pipes and stage lighting fixtures look great. I wanted to get as much of that into the shot as possible, and have them look good too. This meant getting light on them and avoiding casting unsightly shadows. 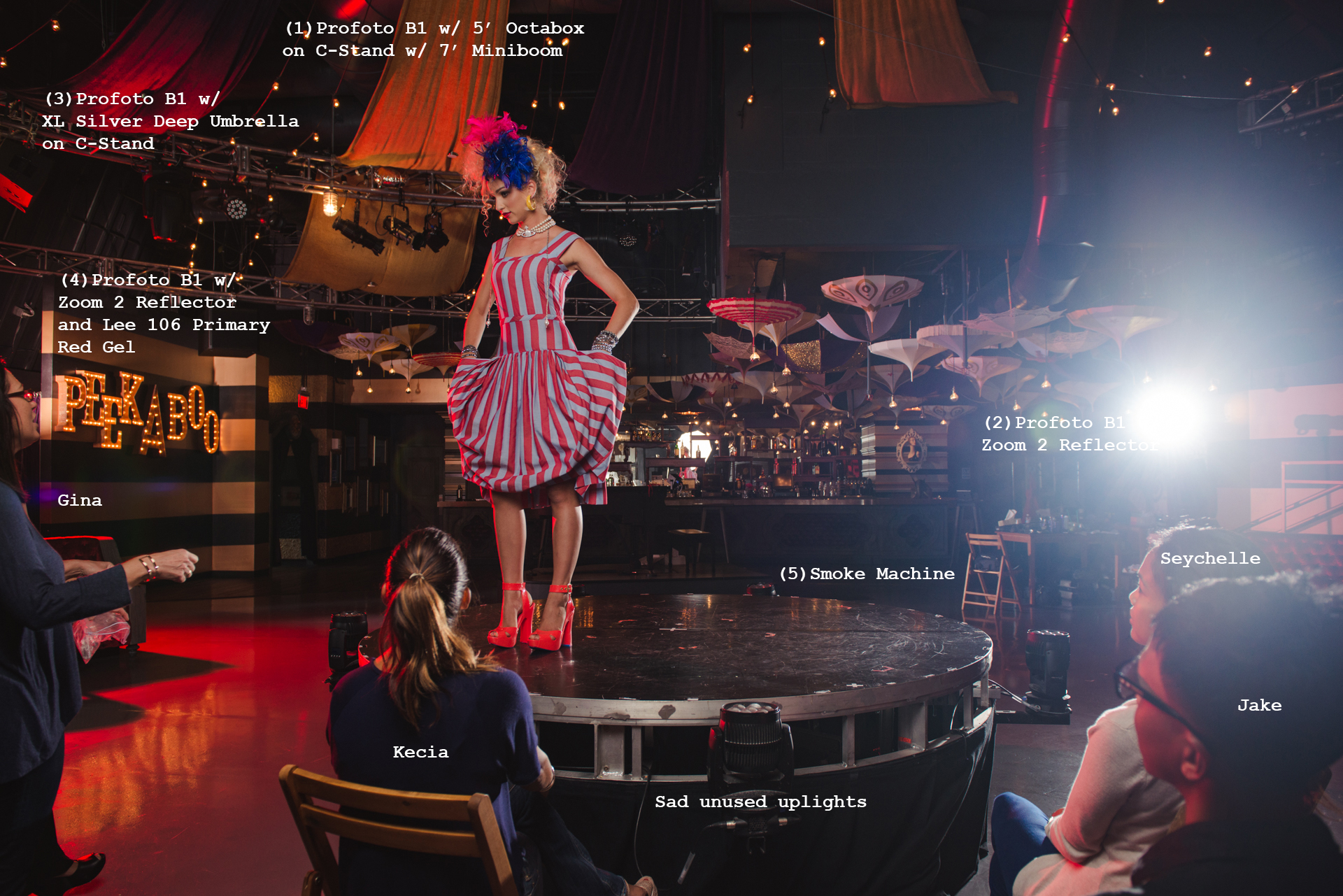 This is not the best BTS shot, as I took while we were still setting up the lighting so none of the lights are in their final places. And as you can see at the top of this section, I shot this look in 15 minutes so I didn’t have a chance to take a better one. The key light is again the 5’ Octabox (1) on a C-Stand with a 7’ mini boom. A side note, the B1 is a pretty heavy head, and for good reason. It has the battery and the radio receiver built in to the head, and with a 5’ Octabox attached, it really strained the load limits of the 7’ mini boom. I’d go for something a little more robust if available. I really wanted the option to have the light directly over the camera. Chris added a second B1 with a Zoom Reflector 2 (2) camera right and way in the back of the room. I had him adjust the position so that the rim would highlight the plane of her cheek and jawline if her face was completely straight on. We also made sure that it would travel the full length of her body, so no grid was used. This also created rim lights on my “audience members” so they would be separated from the stage and the background. I probably could have used 6 B1’s in this setup, but luckily a couple lights were able to adequately cover different areas that I wanted to light. Next we set up the XL Silver Deep Umbrella (3) again to light the background and the ceiling. Output was again carefully calibrated so that we wouldn’t overpower the various incandescent lights, but was strong enough to bring out the color in the silks. Then we added a final B1, with Lee 106 Primary Red Gel (4), this time without a Zoom Reflector 2 to get a wider spread. This went camera left to give a red glow and red highlights to everything, from the silks, to Zoe, all the way to our fake audience members. After my first few shots I noticed that the light from the Octabox was spilling too much on the audience members and they were too bright in my frame. Maybe something I could easily fix in post, but a black flexfill to block off the bottom third of the 5’ Octabox would fix it as well, and Jeff was kind enough to lend an extra hand and hold it in place while I shot. 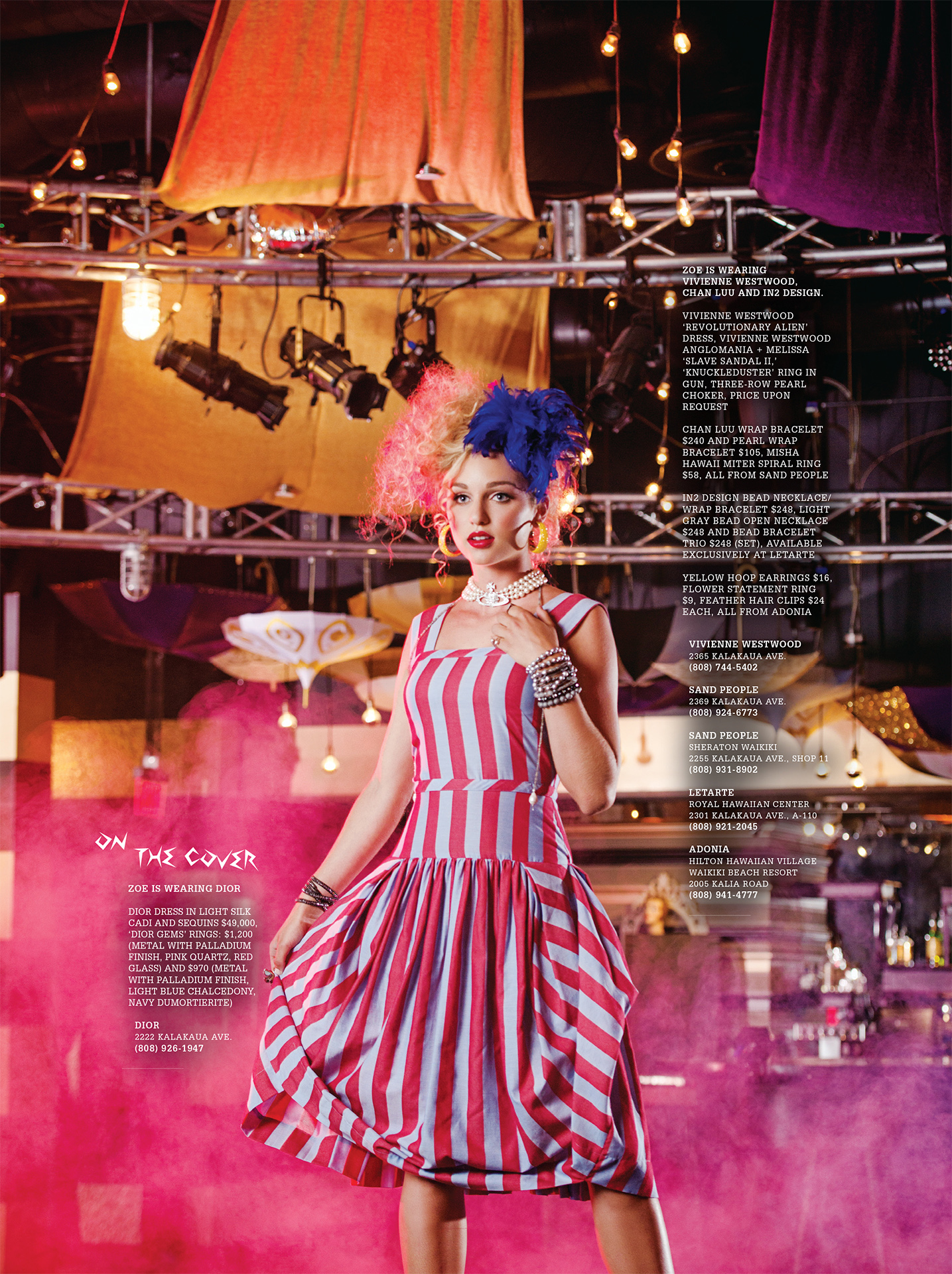 Ah yes. The fog machine. I didn’t buy a $20 one gallon jug of fog juice for nothing. The setup for this shot was exactly the same as the previous shot + Chris hiding behind the stage shooting little puffs of fog up in the air. This type of fog dissipates pretty quickly and turns into a hazy mess, so you only get a couple seconds to shoot before you need to turn the machine off and wait for the air to clear. Then you can go again. According to my exif data, the first shot with smoke was taken at 3:40PM, and the last one was taken at 3:44PM. We didn’t have a lot of time and needed to move onto the next look, but you just need one shot that art director likes and we got it with this one. Phew.

I’d like to point out how quickly Kecia and Jake changed the look here. In 20 minutes they went from Look 3 to Look 4. What a great job done by the two of them, as well as Yushing and the great dresses and accessories she pulled for the day. 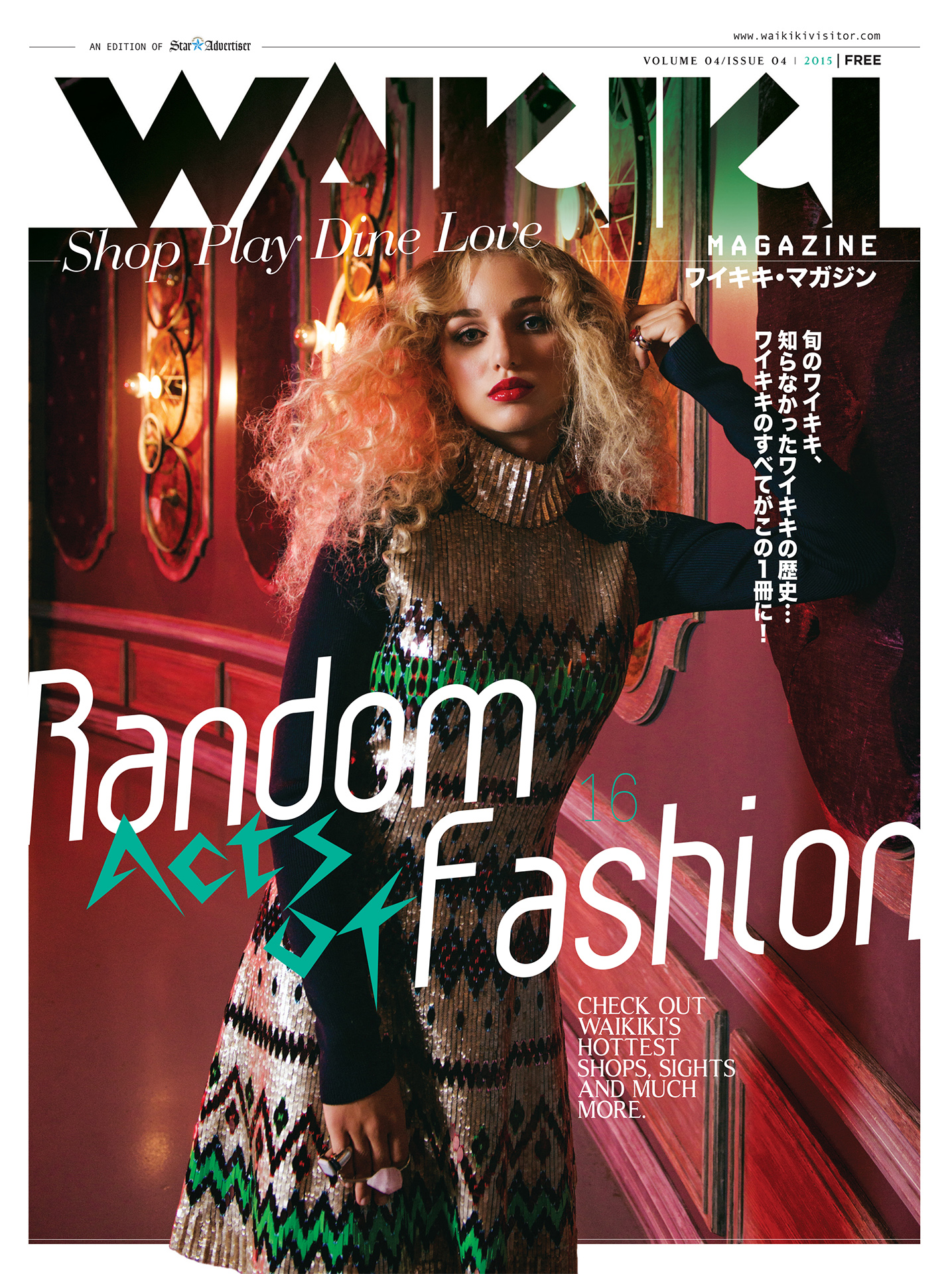 I had a feeling before we shot this that it might produce a cover. It gave us the best chance for a tight intimate shot with good eye contact. The other locations had possibilities but were more likely to produce better wide shots. As mentioned, we needed to be out of there by 4:30 and it was starting to feel apparent. We had performers warming up around the theater and it was difficult to not marvel at what they were doing rather than focus on setting up our lights. What I didn’t mention above, was that this location was supposed to be Look 3, and the previous location and outfit was supposed to be shot last. With the time pressure, Gina and I made the decision to switch the order because the center stage shot was a much more complicated setup and required more from Zoe in terms of movement. We didn’t want that one to come down to the wire. 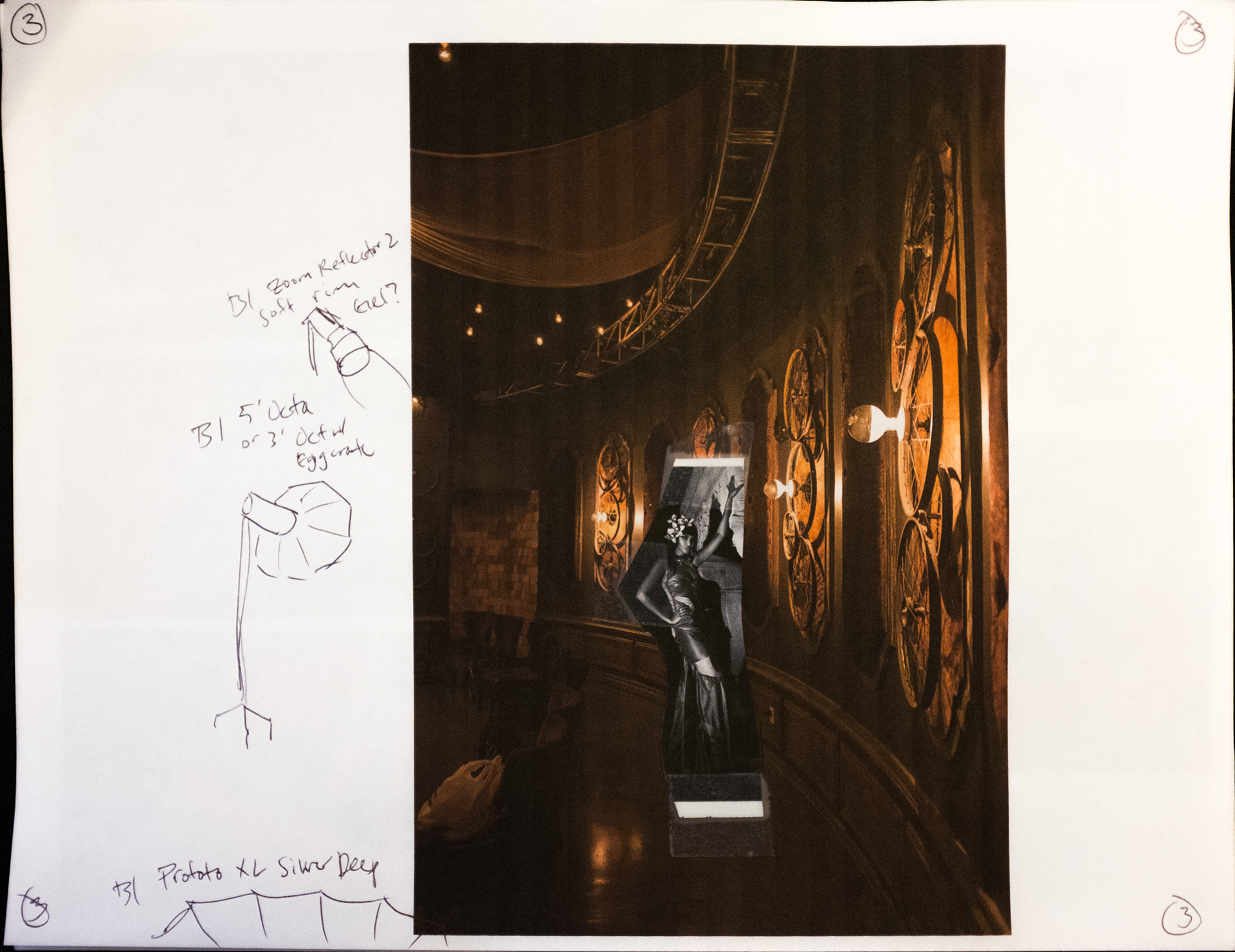 With time running out, I decided to light this look using just one or two lights. Not everything needs to be complicated, and one well placed light is often all you need. I chose the 5’ Octabox on the C-Stand + 7’ Miniboom that we used previously and placed it outside (left) of the couches you can barely see in the lighting diagram above. The placement of this light was actually tougher than anticipated. The chairs and a large pillar kept us from bringing the light more around to the front, and the Rembrandt lighting setup was casting shadows from Zoe’s hair across her face. I moved Zoe back a little bit so it was less of a problem, but I couldn’t move her too far back or we’d lose the nice line made by the curve of the wall. 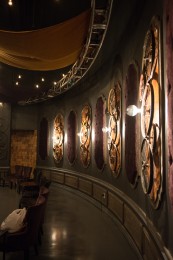 The color of the wall wasn’t working out the way I liked though. You can see a color corrected version of the wall to the left. Unfortunately adding light made the forest green color look more like a washed out muddy grey in-camera. In the end we ended up going with my original idea as seen in the diagram, which was to set up another B1 with Zoom Reflector 2 + Lee 106 Primary Red Gel in back just out of frame camera left. This washed the wall and floor in red and also placed some nice red highlights in Zoe’s hair and the edge of the dress. After that it was up to Zoe to give us a great look. As you can see, I called it a wrap at 4:18PM. We were actually given a slight extension till 4:45PM while I was shooting, but I felt we got what we needed. I had Chris and Kelii help me out by getting everything we weren’t using packed up while I was shooting, so we were out the door by 4:30, just as planned.

For this shoot, I asked Josh for two additional Profoto B1 heads, and as you can see we needed them for almost every look. We could have gotten away with two lights, but without the sun or even a window we literally had two lights. We definitely would not have been able to create much atmosphere or mood, and definitely wouldn’t have been able to pull off the wide shots the way we did in Look 3. It’s also important to note that we probably would have had trouble pulling this off with most other lighting set ups. We had to do four different setups within 3 hours of shooting time, and with young (14!) and brand new model in Zoe, I knew we were probably going to need to full scheduled half hour to shoot each look. Our late start threw that out the window, but having the B1’s probably helped us make up the time. Each one is self contained with it’s own power source and radio receiver. That makes them very easy to move from set to set, not having to worry about power cords or battery packs. By assigning each head to a group I was able to control the output of each light from the Air Remote TTL-N, dialing them in to 1/10 of a stop if necessary. This was especially helpful because we had some heads positioned very high, and lower them or bringing in ladders to adjust the power output would have been even more time consuming. If I have one criticism of the B1’s it’s that the heads are very heavy. I’m sure there’s an engineering reason for it, but I’ve already lost 4 umbrellas to standard and normally sturdy aluminum stands tipping over with these heads. Even with the stand falling a short distance and coming to a rest on a wall, the weight of the head almost always causes the aluminum ribs or center column to bend or break. Nothing happened on this particular shoot, but definitely do what we did here: sandbag em and sandbag em good.

Top 10 Tips To Get Your Best Water Shots